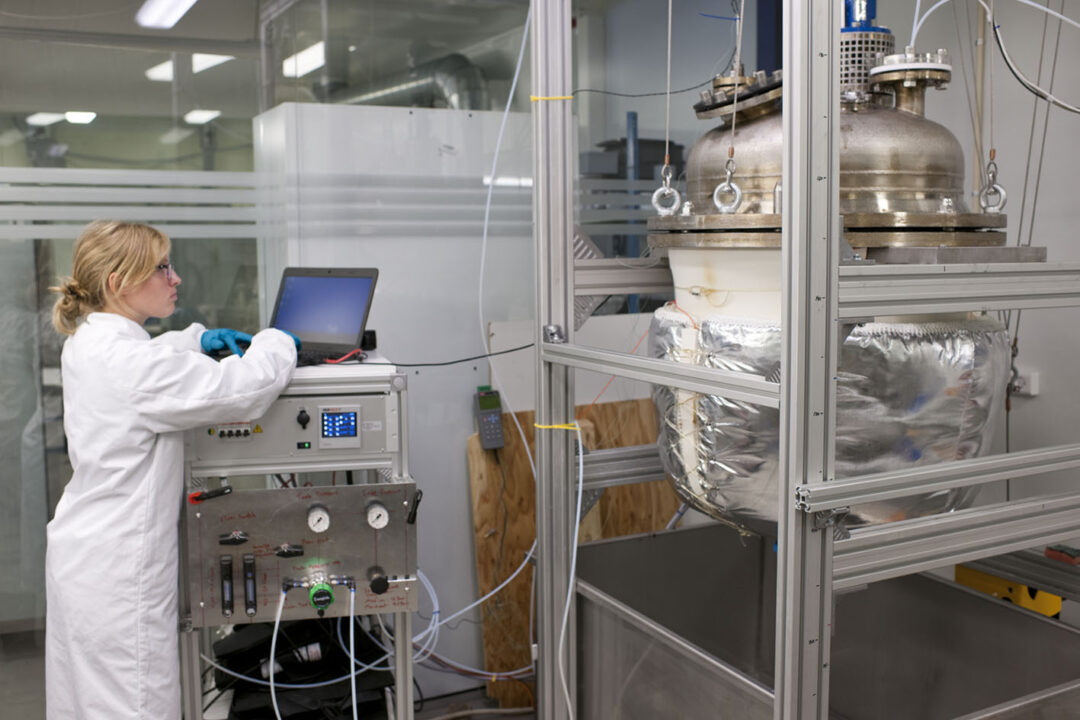 Our Danish members, the clean technology company Blue World Technologies (merged with Danish Power Systems) and Technical University of Denmark, in collaboration with the University of Chemistry and Technology in Prague, Czech Republic, have achieved the best operating stability for high temperature polymer fuel cells seen so far.

– We are very proud and delighted these days, says CSO of Blue World Technologies Hans Aage Hjuler. The company, one of the world’s leading producers of fuel cells, has in collaboration with the department of Energy Conversion and Storage at the Technical University of Denmark (DTU) and the University of Chemistry and Technology in Prague, Czech Republic achieved the best results in the world so far regarding the degradation rate of high temperature polymer fuel cells (HTPEM).

In a 9,000-hour long test, PhD-student from DTU Tonny Søndergaard measured a degradation rate of only half a microvolt per hour. This is equivalent to a degradation of 0.00008 % per hour!

– We have never heard or read about degradation rates this low, so this is simply a world record, says Hans Aage Hjuler. The results from DTU are now published as a scientific publication in the Journal of Power Sources.

The same type of fuel cell from Blue World Technologies has been tested in the Czech Republic at an even higher level of electrical current than tested at DTU. The cell was operating for 15,000 hours with a degradation rate of only 4 microvolts per hour, which is equivalent to 0.0007 % per hour. The test in the Czech Republic was a part of the successful European Union project “Construction of Improved HT-PEM MEAs and Stacks for Long Term Stable Modular CHP Units (CISTEM)” that was coordinated by the German research institution Next Energy (now part of DLR) located in Oldenburg near Bremen.

The systems use methanol as fuel. Methanol is cheap to produce and it is easy to extract methanol from biological resources.

In recent years, Blue World Technologies has focused intensively on increasing exports of fuel cell products where they are successful in manufacturing the special high-temperature plastic contained in the cells. Only a few companies in the world can master the manufacture of this specific polymer. The technology is so mature now that an actual commercialization is in the near future.

– This world record is a milestone in our work towards a commercialization. The advantage of using both hydrogen and methanol is that the systems can generate electricity with almost no pollution and on fuels made from biological ‘green’ materials. Fuel cells can be used in electric vehicles without a hydrogen infrastructure. With a durability this low we are rapidly approaching a breakthrough for large-scale production, Hans Aage Hjuler says.

You have Successfully Subscribed!

We use cookies on our website to give you the most relevant experience by remembering your preferences and repeat visits. By clicking “Accept All”, you consent to the use of ALL the cookies. However, you may visit "Cookie Settings" to provide a controlled consent.
Cookie SettingsAccept All
Manage consent

This website uses cookies to improve your experience while you navigate through the website. Out of these, the cookies that are categorized as necessary are stored on your browser as they are essential for the working of basic functionalities of the website. We also use third-party cookies that help us analyze and understand how you use this website. These cookies will be stored in your browser only with your consent. You also have the option to opt-out of these cookies. But opting out of some of these cookies may affect your browsing experience.
Necessary Always Enabled
Necessary cookies are absolutely essential for the website to function properly. These cookies ensure basic functionalities and security features of the website, anonymously.
Functional
Functional cookies help to perform certain functionalities like sharing the content of the website on social media platforms, collect feedbacks, and other third-party features.
Performance
Performance cookies are used to understand and analyze the key performance indexes of the website which helps in delivering a better user experience for the visitors.
Analytics
Analytical cookies are used to understand how visitors interact with the website. These cookies help provide information on metrics the number of visitors, bounce rate, traffic source, etc.
Advertisement
Advertisement cookies are used to provide visitors with relevant ads and marketing campaigns. These cookies track visitors across websites and collect information to provide customized ads.
Others
Other uncategorized cookies are those that are being analyzed and have not been classified into a category as yet.
SAVE & ACCEPT